“Glottodrama – Metodo teatrale per l’italiano LS” was a two-year multilateral research project approved and financed in 2007 by the Lifelong Learning Programme of the European Union. The project was coordinated by the Research and Language Training Agency Novacultur Srl, former Culturiana Srl, and performed by an international consortium of six institutions from four countries (see details in the partner section). It was aimed at developing and testing an innovative, totally drama-based methodology to teach foreign languages, with the aim of integrating theatrical techniques and resources with the communicative approach. The 2008/2009 project targeted Italian as a foreign language or second language and envisaged the experimentation of a method to teach Italian as a foreign language. Classes were conducted by two teachers, one language and one drama. The course programme, after an initial phase of workshop activities, envisaged the writing and the acting of a whole play-script or screenplay on stage. The scripts were explored by the student-actors in all dimensions ( linguistic, cultural and dramatic content ) under the guidance of the teacher-directors and the acting performances not only represented the main pedagogical technique but also the final objective. The Glottodrama project was born from the recognition of national and international experiences in the application of theatre to language teaching. The recurring results from these teaching experiments have shown the potentiality of such an approach for language learning but have also highlighted the limitation of the experience when conducted without the support of professional actors. The partnership that brought the Glottodrama project to life arose from the common need to deepen this experience, going beyond the traditional formula of the “theatre in foreign language” that risks shadowing the acting aspects in favour of the linguistic and formal aspects. The idea was to integrate specific work on acting aspects (voice pitch, diction, gestural art etc.) into the course syllabus, that can stimulate the ability to carry out linguistic acts suitable for real communication situations, including paralinguistic aspects, with a higher level of command of expressive means and a greater awareness of their pragmatic effect. The flexibility of the use of Glottodrama must also be emphasized. It can be adapted to any level of knowledge and to any educational context: from elementary levels of study to higher levels for a greater command of linguistic and transgrammatical aspects. Glottodrama can be conceived as the main language course but also as a parallel activity, to be integrated with courses based on different methodologies. It does not conflict with any learning programs already operating in the various European educational systems, but offers instead a new learning opportunity with the principal aim of attaining oral proficiency.

The introduction of the Glottodrama method had amongst its main objectives that of making the learning of Italian more stimulating and attractive to students, a language which is often a choice for a second or third foreign language in the main European educational systems when the curriculum is based on multilingualism. In this way, the project could contribute to increase the average number of foreign languages learnt per student in secondary schools. Several benefits were targeted by the project: removing emotional filters so as to acquire a more natural and expressive ability; develop a better awareness of linguistic applications as they apply to different situations and contexts; stimulate the ability for global communication by applying best verbal and non-verbal solutions; using the second language more spontaneously as the tool to express those emotions and feelings usually expressed using the first language, even at higher levels of learning. Moreover, it transforms the unnatural dynamics of the classroom lesson into the more natural and motivating dynamics of the theatre company, a group founded on pursuing a collective goal (project-work) and characterized by an intense interpersonal emotive exchange and from a strong sense of belonging. To pursue these objectives, Glottodrama, which assumes as its theoretical basis the communicative approach with an affective-humanistic orientation, makes use of strongly motivating activities in the context of specific project-work (performing a play) and involves students in several situations of “strategic interaction”, that is to say, situations of communicative interaction in which negotiating activities are faced by learners in order to achieve a goal (Di Pietro R.J.).
In other words, Glottodrama focuses on communicative performance as a complex semiotic act, a harmonious synthesis of multiple codes, both verbal and non-verbal, moving from a holistic conception of language learning. Last, but not least, is the intercultural objective: the deep understanding of a dramatic text means to seize a culture in action. This culture shows itself, both in an explicit manner, through textual references widely known in the cultural universe of native speakers, and on an implicit level, with reference to the general knowledge that the encoder shares, or should share, with the decoder and which Umberto Eco defines in semiotic terms as “encyclopedia”.

Quantitative Analysis of results. Glottodrama students get better results in oral skills.
Language examinations administered in experimental classes (2008/2009) have shown similar and homogeneous results
The testing involved a total number of 238 students: 112 in Glottodrama pilot classes and 126 in control classes, from four countries (Italy, France, Romania, Greece) with different ages (from secondary school to adult education) and different language levels (from A1 to C1).
Language tests have not been designed and tailored on the specific teaching programmes used in classes but independent exams have been employed. Therefore papers have been based on the exams administered in past official sessions by the major Italian recognized examination Boards (CILS – University for Foreigners of Siena and CELI- University for Foreigners of Perugia) and an extra-paper on “oral interaction” has been added by the Coordinator to check combined skills (reading, speaking and listening). Most of the tests were administrated after completing 90 hours of tuition. The results achieved by Glottodrama students were compared with the results achieved by the students of the control classes where other teaching methods were in use (with the same amount of tuition and language content). The results are compared in the following table: 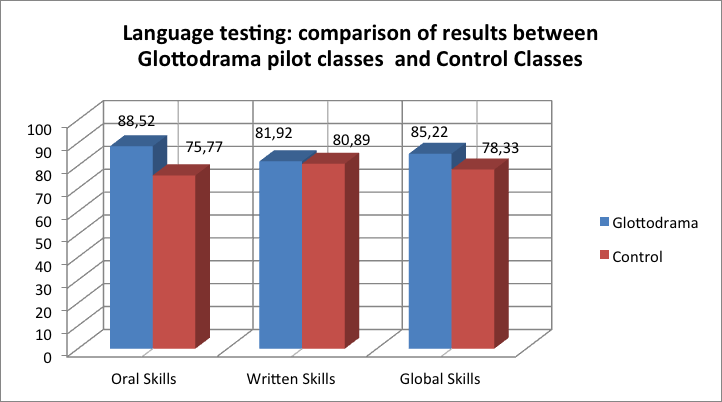 Exams have been both written and oral, with one exception, and results have been worked out on a scale of 100 points in terms of percentages. The average score of Glottodrama students in the written papers has been about 81,92/100 whereas the control class average score has been 80,89/100. This shows that the main focus of the Glottodrama Method on oral skills have

Qualitative Analysis: feedback from students and teachers.
A reinforced motivation.
The psychological impact of the method turned out to be a very remarkable benefit for students. The results of a questionnaire filled in by 77 Glottodrama students at the end of the course have shown the following: 97,4% of students would repeat this experience and 98,7% would suggest this course to other students; 97,4% have expressed the intention of attending a further course in Italian and 100% have appreciated having two teachers working together. This data shows very clearly that students have welcomed this learning experience with enthusiasm and that it has strengthened their motivation significantly.
Learning in a pleasant way without a great effort. During oral interviews, some of which were video-recorded, most of the students have underlined two aspects of the course they particularly appreciated: the game-like atmosphere of each lesson and the personal impression of learning without a great effort. A summary of the feedback from the questionnaires is shown in the following graphic: 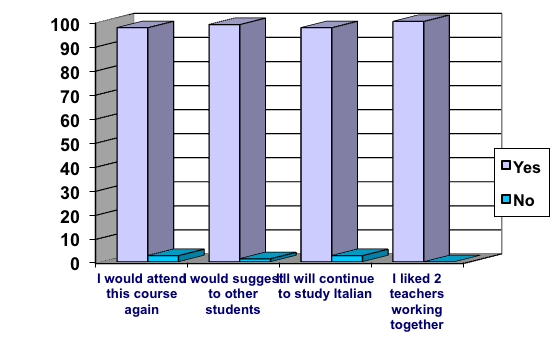 Glottodrama has also been a new exciting and stimulating experience for the teachers.
All teachers agree with the general successful impact of the method on students. In addition, some of them found that the Glottodrama experiment has been also a “liberating” experience that has mirrored pedagogical beliefs they had before but they could not turn in practice by using other teaching approaches.